Today is Remembrance Day in Canada. As a child, I knew this was when the red poppy’s were worn and we did some sort of art work at school in reference to the war. My family didn’t know any war veterans so as a child, it was hard to understand what all the fuss was about.

It wasn’t until I accidentally heard a news broadcast one Remembrance Day explaining that we have our freedom because of those men and women that served in the wars. The reporter delved in to what life might be like if we had lost to the German army. 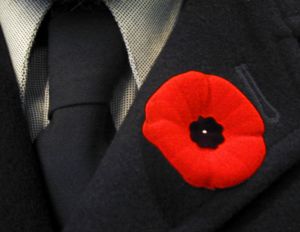 At my young age, finally someone had connected the dots for me. Being so young, I didn’t really understand what war meant. Sure there are guns and the two sides shoot at each other hoping to win but I had limited understanding of what the consequences of losing meant.

Since then, I have put the Nov 11th moments of silence to good use. I don’t just sit there looking at lint on the floor.

I think of the atrocities people in service must have experienced and if they lived, probably still haunt them. I pray for them and give thanks to the freedoms I have and take for granted most times.

If you want to have a better understanding of what people in service went through, watch the “Band of Brothers” DVD set. It is a 12 hour miniseries that follows the real happenings of Easy Company in World War II. This company was there at the very beginning until the very end of the war.

“Band of Brothers” is a real eye opener. The miniseries shows interview footage of the survivors of Easy Company. If you had little appreciation for war veterans before watching these DVD’s, you will after.

I personally don’t know any War Veterans but if any are reading, I want to thank you for your bravery and service. It has not gone unnoticed.